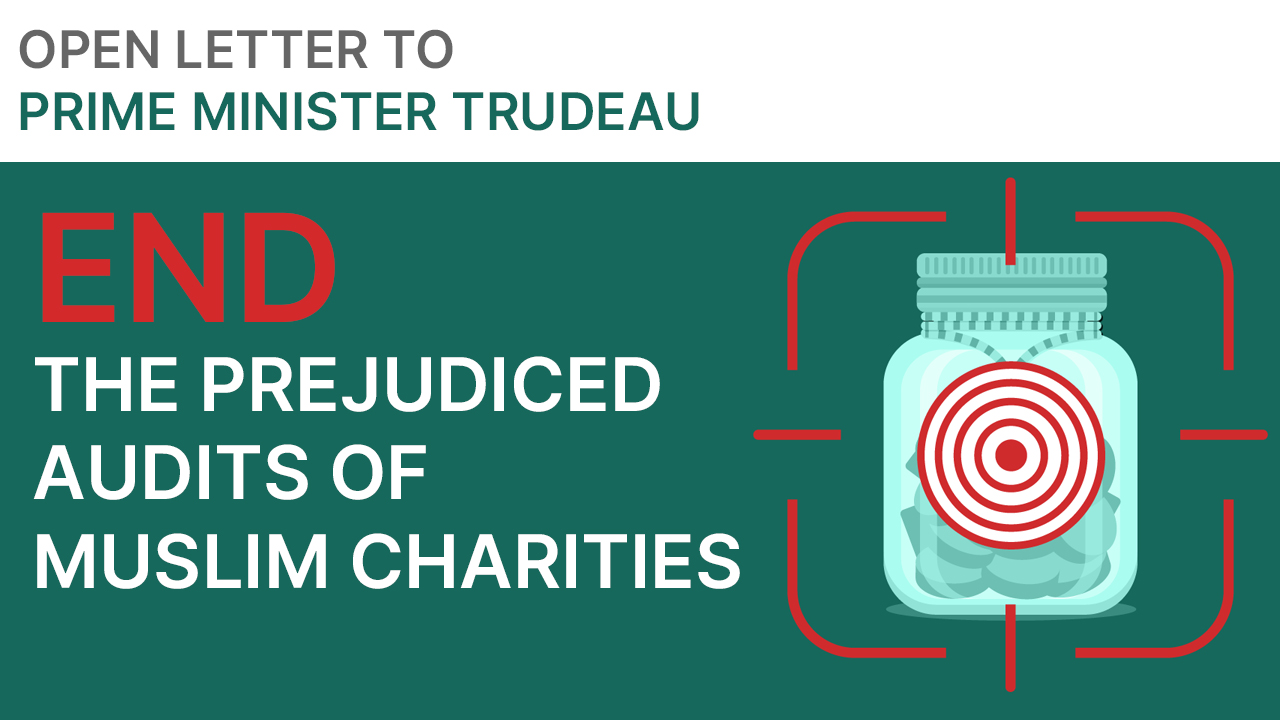 More than 130 groups signed an open letter to Prime Minister Trudeau and members of his cabinet, raising concerns and calling for action in regards to the Canada Revenue Agency’s prejudiced audits of Muslim charities, under the auspices of countering terrorist financing.

The letter is in support of the revelations and recommendations included in ICLMG’s new report “The CRA’s Prejudiced Audits: Counter-terrorism and the targeting of Muslim charities in Canada.” You can read the full report, executive summary, and write to Prime Minister Trudeau to add your voice at https://iclmg.ca/prejudiced-audits.

The Right Honourable Justin Trudeau
Prime Minister of Canada
Office of the Prime Minister
80 Wellington Street Ottawa, ON
K1A 0A2

re: CRA’s prejudiced practices and an immediate moratorium on audits of Muslim charities

Prime Minister, at the vigil for the Afzaal family killed by a horrific terror attack, you said, “Islamophobia is real. Racism is real. You should not have to face that hate in your communities, in your country.” You promised to take action: “We can and we will act. We can and we will choose a better way.”

Action on this is urgent and crucial. It is imperative to address and undo systemic racism, xenophobia and Islamophobia in Canada’s pursuit of “national security.” The profiling and targeting of the Muslim community is, in and of itself, deeply damaging and a violation of fundamental rights.

We are collectively writing to you regarding the findings of two independent reports about the Canada Revenue Agency’s (CRA) alleged Islamophobic and prejudiced practices.

In March 2021 the National Council of Canadian Muslims (NCCM) and the University of Toronto published a report that identified whole-of-government policies and patterns of audit practices that together demonstrate potential biases in CRA audits of Muslim-led charities.

Last week, the International Civil Liberties Monitoring Group (ICLMG) released a new report detailing how a secretive division within the CRA, the Review and Analysis Division (RAD), is targeting Muslim charities in Canada for audits, and even revocation, using an approach that appears prejudiced and lacking in evidence. The report disclosed that between 2008 and 2015, 75% of all charities revoked by RAD were Muslim, despite Muslim charities representing 0.47% of registered charities in 2015. The statistics before and after this timeframe are not available to the public. Despite this, the ICLMG reports that since 2015 at least four more Muslim charities have lost their status following RAD audits, and several Muslim charities are currently under audit and face risk of revocation.

Muslim charities offer important religious services in mosques. They offer authentic Islamic education in their schools. They offer social services and youth programs in their centres. They offer relief to the most vulnerable in Canada and abroad. They are developing a healthy and strong Canadian Muslim identity that contributes to our strength through diversity every single day. Muslim charities are a vital segment of Canada’s charitable sector.

Targeting Muslim charities on the basis of terrorist financing suspicions simply because of the religion they uphold is Islamophobic and prejudiced. Such targeting also negatively impacts the Muslim community and the beneficiaries of their charitable work. Institutional and structural Islamophobia contributes to an atmosphere of intolerance and hate, and signals to Canadians that their fellow Canadian Muslim charities are not to be trusted. Not only are Muslim organizations being targeted by the government with questionable and unfounded allegations of promoting radicalization, the process of an audit, and possible revocation, creates a chilling effect that can cripple the Canadian Muslim charitable community.

Dismantling such prejudice is the first step in fighting hate.

The Ministry of National Revenue has direct responsibility over the CRA and therefore RAD. The Ministry of Finance created the 2015 National Risk Assessment (NRA) that has empowered RAD to target Muslim charities. The Ministry of Public Safety’s agencies closely work with RAD and provide it information and resources to conduct its audits.

The assertions and conclusions of government anti-terrorism laws and the 2015 NRA directive have been implemented by agencies in a manner that targets and profiles Muslim organizations and communities, supports Islamophobia and has produced bureaucrats and agents who have become invested in these Islamophobic practices – whether they recognize them as prejudiced or not. While this approach may not be officially sanctioned by the government of Canada, it is real, it is happening and it allows Islamophobia to persist unaddressed.

We call on you to act upon the recommendations from the ICLMG report:

3. That the Ministry of Finance revisit the anti-terror regulatory, policy and legislative landscape, particularly the 2015 NRA and its impact, particularly on the Muslim community.

4. That the federal government amend the NSIRA Act to allow for complaints from the public regarding the CRA’s national security-related activities.

5. That NSIRA and the National Security and Intelligence Committee of Parliamentarians (NSICOP) coordinate to carryout regular reviews of the CRA’s anti-terrorism activities – including the Charities Directorate and RAD – going forward.

The CRA RAD’s policies and practices are neither fair nor effective, and are undermining
Canadian values of due process and fairness.

Prime Minister, you have committed to an Emergency National Action Summit on
Islamophobia in the coming weeks. It is also important for our community to see
effective action against systemic and structural Islamophobia. We call on you to put an
end to the Islamophobic practices within the CRA and to ensure oversight and
accountability.