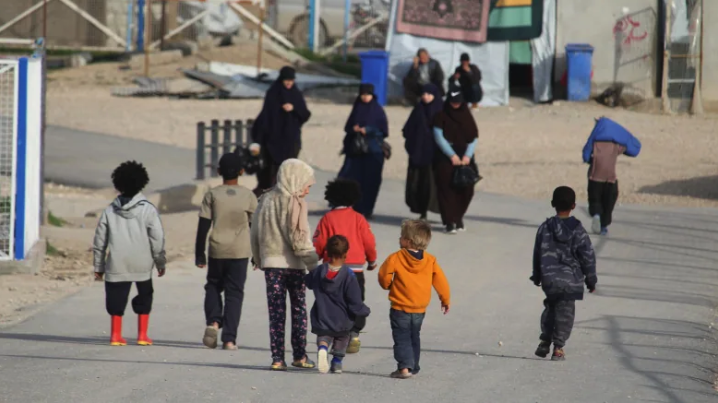 Women walk with their children in the al-Roj detention camp. (Stephanie Jenzer/CBC)

It is imperative that the government stop delaying and act urgently to repatriate all Canadians who continue to be held indefinitely in camps and prisons, in life-threatening and rights-violating conditions, in Northeastern Syria.

I’m writing to you today on behalf of the International Civil Liberties Monitoring Group in regard to the urgent matter of the more than 40 Canadians who are currently in indefinite detention in Northeastern Syria under life-threatening conditions with no prospect of release or due process.

We welcomed your government’s repatriation of four Canadians in November, and we also welcome the recent indication that your government has determined that 19 of the remaining Canadians have met the threshold for consideration of the provision of extraordinary assistance under the policy developed by Global Affairs Canada.

However, we are extremely concerned that this decision will leave some 20 other Canadians – including children – to languish in these camps and prisons.

Moreover, previous repatriations under the government’s extraordinary assistance policy have taken more than a year to come to fruition. We fear this process does not meet the urgency of the situation given the current crisis in Northeastern Syria, including the onset of winter, the ongoing COVID-19 pandemic, reported cholera outbreaks, and, most recently, the bombing of the region by Turkish forces.

We are calling on your government, once again, to take immediate steps to repatriate all Canadians currently detained in Northeastern Syria in response to the grave human rights violations they are facing as well as the very real threats to their lives.

This past week, your government has been in court arguing against a group of families representing 23 of those detainees, who filed a Canadian Charter of Rights and Freedoms challenge to your government’s refusal to repatriate their loved ones. It is deeply troubling that your government has continued to fight this case, given its stated commitment to opposing indefinite and arbitrary detention internationally.

At the end of the two days in federal court, Justice Brown stated that the hearings would need to continue at a date to be determined. According to CBC journalist Ashley Burke, Justice Brown stated he was disappointed because Canadians are at risk of dying every day the matter is adjourned.

The clear solution is that your government ends its opposition to this court challenge, and instead takes every action to ensure the safe return of the Canadians detained in Syria.

Without immediate action by your government, these Canadians will remain in unlawful detention, under life-threatening conditions for the foreseeable future. Moreover, some have made credible allegations of torture or living conditions akin to torture. This is in clear violation of their fundamental human rights: all deserve a chance to live a life free of arbitrary detention and to be integrated back into society (including the possibility of facing charges and court hearings back in Canada).

Canada’s obligation to act was made clear in a recent report from UN officials, including the UN Special Rapporteur on the promotion and protection of human rights and fundamental freedoms while countering terrorism and the UN Working Group on Arbitrary Detention. In their letter to the Canadian government, they wrote:

[We] reiterate again that the urgent, voluntary and human rights compliant repatriation of all the citizens of your Excellency’s Government is the only international law-compliant response to the complex and precarious human rights, humanitarian and security situation faced by those detained in inhumane conditions in overcrowded prisons or other detention centres in North-East Syria, with limited access to food and medical care putting detainees’ lives at increased risk.

Finally, it is essential to avoid a situation where so-called “good detainees” are freed while the “bad” – male Canadian prisoners, along with women without children in the camps – are left there to suffer because they are viewed as more of a risk, or as already guilty of a crime, without having ever been charged or tried.

We have seen throughout the so-called “War on Terror” how individuals – mainly Muslim men – have been labeled as criminals, terrorists and threats to our security, and allowed to be detained in life threatening, rights-violating situations, including being tortured, all without evidence and based solely on suspicions and profiling.

It is imperative that if, as Prime Minister Trudeau has said, your government truly adheres to their obligations to protect the rights of Canadians, no matter where they are in the world, that you act without delay to repatriate the remaining Canadian detainees in Northeastern Syria.

We would be happy to discuss this matter further with you or members of your staff.