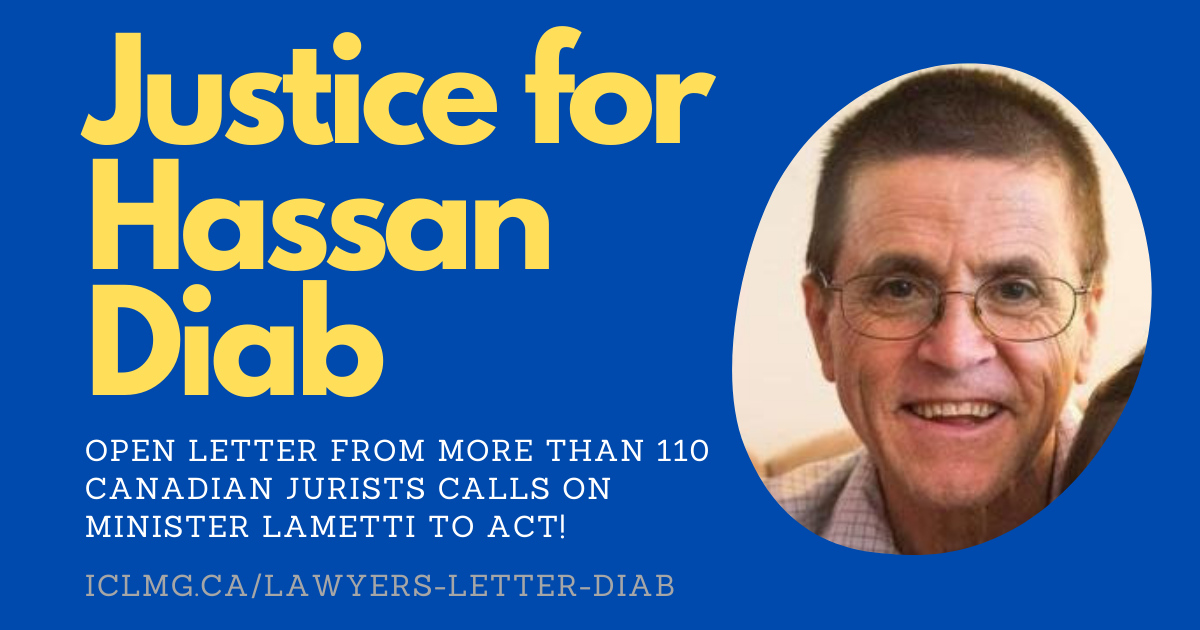 The International Civil Liberties Monitoring Group (ICLMG) has made public an open letter addressed to the Minister of Justice David Lametti. The letter is signed by 118 members of the legal profession and legal scholars in Canada. It has also been copied to the Prime Minister, the Minister of Foreign Affairs, the Deputy Prime Minister, and leaders of political parties. In it, the signatories call on Minister Lametti and his colleagues to take immediate action to protect the rights of Dr. Hassan Diab, a Canadian citizen, who continues to face a 13-year-long Kafkaesque process in the French legal system.

The full letter is below, or click for a PDF.

In the open letter, the signatories request:

Recently, over 10,000 letters from individuals and organisations were sent to your government expressing grave concern about the latest news regarding Hassan Diab and the prospects of a second extradition. In what appears to be a standard reply, you wrote the following:

“As extradition requests are confidential state-to-state communications, I cannot confirm or deny the existence of a request until and unless it is acted upon. Canada would review a new extradition request in accordance with the Extradition Act, the Canadian Charter of Rights and Freedoms, and our treaty obligations. A decision to start extradition proceedings would consider whether there is sufficient evidence to support the request as well as whether it is in the public interest to proceed.”

Your reply is unconvincing for the following reasons:

The urgency of the Hassan Diab case demands your intervention and, as expert lawyers have noted, you have the power to act now and not delay. Your wait-and-see approach is thus unjustified. “Parliament [has given you] full discretion not only to reject extradition requests out of hand but also to terminate them when to proceed appears to be against the national interest. This unusual provision, repeated in sections 14, 23(3) and 48(1) of the Extradition Act, is founded on the notion that extradition is not at base a legal or judicial issue, but rather is political in nature” (Gary Botting, https://legalmatterscanada.ca/hassan-diab-deserves-better-from-the-justice-minister).

Parliament has also given you, the Minister of Justice and Attorney General, certain extraordinary powers, including the ability to exercise your “discretion to stop an extradition proceeding in its tracks… where proceeding to court would likely have major political ramifications” (Gary Botting, https://legalmatterscanada.ca/hassan-diab-deserves-better-from-the-justice-minister).

You are no doubt aware “that in extradition matters, the courts act only in an advisory capacity. As soon as [you decide] to exercise [your] discretion to say “enough is enough” in an extradition case, the extradition is over, because under s. 23 of the Act, the judge is then compelled to discharge the person facing extradition” (Gary Botting, https://legalmatterscanada.ca/hassan-diab-deserves-better-from-the-justice-minister).

The extradition treaty with France to which you refer is inherently defective. There is no comity between France and Canada. In the Hassan Diab case, this lack of reciprocity has revealed France’s disrespect towards Canada. France has proven to be an untrustworthy extradition partner. It claimed to have evidence where there was none; it claimed to be ready for trial when it was not; and it lied in 2007 about a lack of fingerprint evidence when there was an abundance of fingerprints, each of which excluded Dr. Diab. France’s dishonesty was one of several factors that led to Dr. Diab’s unconscionable 39-month imprisonment in France.

As Rob Currie, Professor of Law at the Schulich School of Law at Dalhousie, has pointed out, the United Nations International Covenant on Civil and Political Rights (ICCPR) requires fair criminal investigation and trial procedures (Rob Currie, https://rabble.ca/news/2021/06/canada-should-suspend-its-extradition-treaty-france-over-persecution-hassan-diab). By ignoring evidence and substituting speculation, France has clearly violated this covenant in its Court of Appeal ruling of January 27, 2021.

The last shred of flimsy handwriting “evidence”, on which Dr. Diab was wrongly extradited in 2014, was jettisoned earlier this year by French handwriting analysts. There is no more evidence to support any extradition request. Short of veritable proof, the French Court of Appeal has thus resorted to fictions. In an exhaustive statement, Dr. Diab’s lawyer, Don Bayne, showed with impeccable logic that France’s Court of Appeal misstated facts, relied on discredited evidence, made up non-existent evidence (fanciful speculation), and engaged in contradictory reasoning (Don Bayne, https://www.justiceforhassandiab.org/bayne-memos-2021-05).

The persecution of Dr. Diab has now exceeded 14 years of his life, including more than 3 years in a French maximum-security prison, mostly in solitary confinement. He should no longer face the uncertainty of another extradition and Canada should take strong action to let France know that unfair political trials of Canadian citizens are not tolerated.

Thousands of Canadians have come to know the Ottawa professor as an innocent man, whose life has been massively damaged and whose rights and freedoms have been violated by France’s relentless persecution. These many persons, along with many organizations, have become Dr. Diab’s fervent supporters. They understand that he represents every Canadian, and that his loss of freedom could one day be theirs. That realization governs their passionate and persistent vindication of his cause. And they will not renounce their fight for justice until it is served. You, Sir, together with Prime Minister Justin Trudeau and Minister of Foreign Affairs, Marc Garneau, have the power to make that happen. Indeed, you have the obligation to reject any renewed extradition request from France and to bring this case to a close.

We, the undersigned, therefore ask: