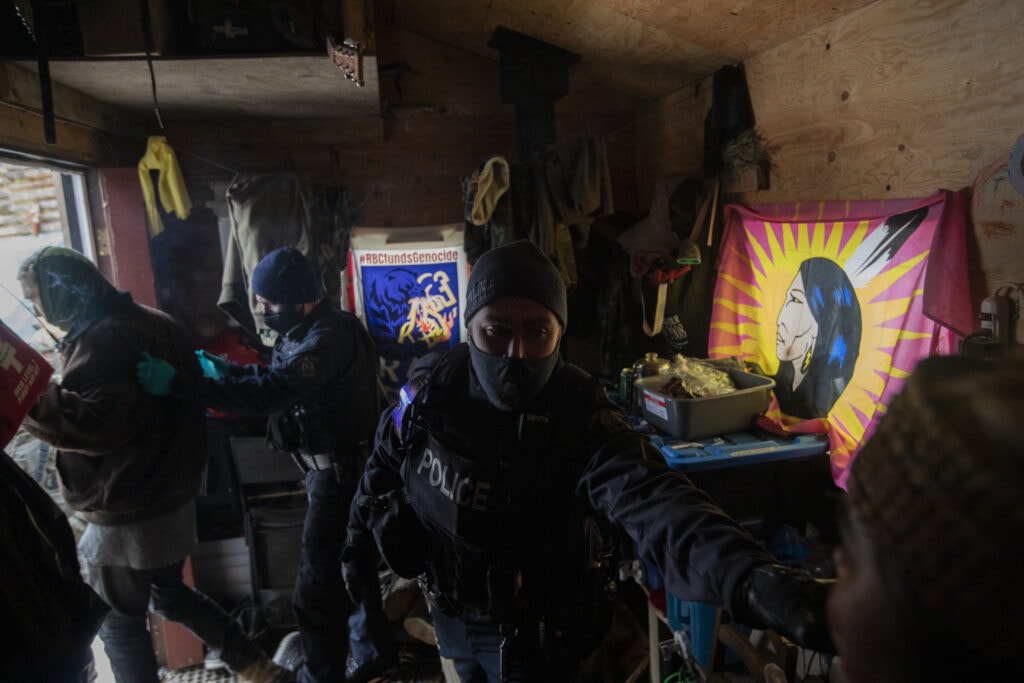 In November 2021, the RCMP invaded unceded Wet’suwet’en territory and violently raided Coyote Camp, set up by Gidimt’en Checkpoint organizers to protect the land and water from Coastal GasLink. Thirty people in total were arrested, including two journalists. All have been released after several days in jail with various conditions, and charged with civil contempt. The Coyote Camp cabin that was raided has since been burned to the ground.

The ICLMG is a coalition of 45 organizations across Canada, based in Ottawa on unceded Algonquin land. The ICLMG’s primary focus is on the impact of national security and anti-terrorism laws and activities on civil liberties and human rights in Canada and internationally.

The coalition has long-expressed its concerns about how national security is used to stigmatize and criminalize land defenders. The ICLMG opposes the ongoing use of the country’s national security apparatus to enforce an injunction to remove Wet’suwet’en land defenders from their territory, and to force the Coastal Gas Link natural gas pipeline through Indigenous territory without free, prior and informed consent. Over the past decades, provincial and federal governments have increasingly positioned resource development and the extraction of fossil fuels as superseding Indigenous law and rights, and have painted the defence of those rights as threatening Canada’s “national security;” which they define as including Canada’s “financial stability” and “economic interests.” 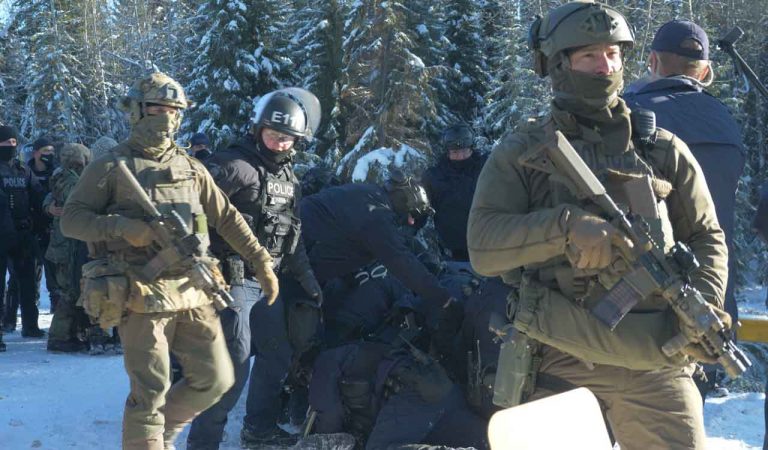 The RCMP framed their invasive attack as a rescue operation for the safety of trapped CGL workers and as the enforcement of an injunction. However, workers have said they were not made aware of the advance warning given to CGL by the Wet’suwet’en that they were going to block the road, and that if the workers had known, they would have left. Furthermore, the court injunction itself has been demonstrated to be unsound by Canadian and Indigenous legal experts.*

Not only are the RCMP, the BC and the federal governments violating Wet’suwet’en law and Canadian law, they are also violating international law, namely the United Nations Declaration on the Rights of Indigenous Peoples (UNDRIP) and their right of free, prior and informed consent regarding extractive projects on Indigenous lands.

Given all this, the actions of the RCMP, supported by the BC and Canadian governments, continue to violate rights, liberties and the law by treating Indigenous land defenders and allies as a national security threat. These most recent actions by the RCMP cannot be separated from the historical context of the RCMP’s predecessor, the North-West Mounted Police, being created as part of Canada’s colonial project in order to assert sovereignty over Indigenous peoples and their lands. For Canada to truly break with this history, it must take immediate action to respect the Wet’suwet’en’s sovereignty over their territories and withdraw the RCMP.

The ICLMG believes that the security and safety of people living in Canada will be achieved through the respect of fundamental rights and liberties, including the respect and recognition of Indigenous rights, and not through the criminalization of land defenders under the guise of “national security” and the use of armed invasions and arrests.

For more information, to take action & to donate:
Gidimt’en Access Point
Host a solidarity rally or action in your area: Upcoming actions are being compiled in the description of this event
Issue a solidarity statement from your organization or group. Email to: yintahaccess@gmail.com
Pressure the government, banks, and investors: http://yintahaccess.com/take-action-1
Donate: http://go.rallyup.com/wetsuwetenstrong
Go to Camp. yintahaccess.com/
Spread the word

* In its 1997 decision in Delgamuukw vs BC, the Supreme Court of Canada recognized that constitutionally-protected Aboriginal title includes the right to use, enjoy, benefit from, occupy and pro-actively manage the land. Available at: https://scc-csc.lexum.com/scc-csc/scc-csc/en/item/1569/index.do. See also: Hernandez, J. ‘’We still have title’: How a landmark B.C. court case set the stage for Wet’suwet’en protests”, CBC News, Feb. 13, 2020. Available at: https://www.cbc.ca/news/canada/british-columbia/delgamuukw-court-ruling-significance-1.5461763; and Gunn, K. & B. McIvor, “The Wet’suwet’en, Aboriginal Title, and the Rule of Law: An Explainer”, First Peoples Law, Feb. 13, 2020. Available at: https://www.firstpeopleslaw.com/index/articles/438.php: “The Indian Act does not provide authority for a Chief and Council to make decisions about lands beyond the boundaries of the First Nation’s reserves. By contrast, the Hereditary Chiefs are responsible under Wet’suwet’en law and governance for making decisions relating to their ancestral lands.”