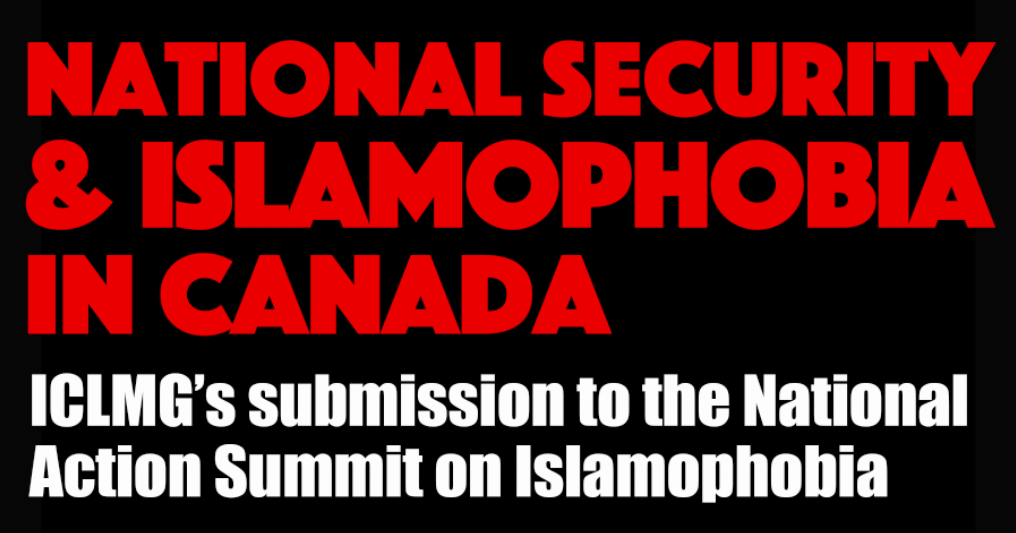 As a broad-based coalition deeply concerned by the impacts of Islamophobia and other forms of hate and racism in Canada, we have submitted a brief to the National Action Summit on Islamophobia proposing ways the Canadian government can work to address and counter Islamophobia in our country.

Our coalition’s focus is on the impacts of national security and anti-terrorism laws in Canada, and our country’s role and actions post 9/11, throughout the so-called War on Terror, and the evolving views on terrorism, extremism and violence today. We have documented, criticized and proposed solutions to the negative impacts that these laws have had on freedom of speech, association, religion and movement; on privacy; on levels of government surveillance; on the rule of law; on due process and access to justice; and on equality rights.

Throughout all this, we have also seen a deeply problematic and consistent problem of racial, religious and political profiling, abetted by the vague and overreaching definitions of terrorism and national security. Central to this has been the targeting of Muslims, Arabs, and those perceived to be Muslim, although it has also deeply impacted other communities, most notably Indigenous Peoples as well as environmental and climate activists.

This undue focus on the so-called “Islamist” threat, espoused even by a former prime minister as being the “greatest” threat to Canada, has led to two decades of state-sanctioned, systemic racism against Muslims in Canada. This systemic racism has had a tangible, negative impact on Muslims living in Canada and around the world. Much needs to be done to address individual acts of hatred and Islamophobia; however, the role of state systemic (and overtly) Islamophobia must also be clearly and immediately addressed. And while the response to “individual” vs. “systemic” Islamophobia may take different shapes, it is crucial to recognize how one supports the other.

Decades of government agencies and officials framing Muslims in Canada and internationally as being the most direct threat to national security – despite a lack of evidence demonstrating that threat, and in ignorance of other more direct threats such as the horrific treatment of Indigenous peoples, the threat of climate change, and increasingly the threat of white supremacist violence – have fed the fears of the public, causing individuals to view their Muslim neighbours and colleagues with fear and suspicion.

While the colonial and racist origins of national security in Canada have undoubtedly persisted into the present, it’s important to be reminded that:

While the responsibility does not lie with the federal government alone – far from it – it plays a powerful role in perpetuating these beliefs, and can play an incredibly important role in countering them.

Over the past two decades, studies by academics and civil liberties organizations have repeatedly documented the disproportionate impact of national security measures on Muslim communities. Laws like the Anti-Terrorism Act, 2015 and the National Security Act, 2017 have expanded national security powers without adequate transparency and oversight, disproportionately threatening the fundamental rights and freedoms of Muslims.

The laws and policies have resulted in the criminalization and surveillance of Muslim communities in Canada, including:

If the federal government truly wishes to address Islamophobia, it is urgent that it reconsiders and moves away from the disastrous policies of the “War on Terror.” Efforts to expand the definition of terrorism or the use of its tools to other groups, or to “refocus” Canada’s anti-terrorism approach, will unfortunately not lead to the necessary changes. It is imperative to forego the entire framework of anti-terrorism and to rescind rights-violating laws because of problems inherent to the vague and politically malleable nature of “terrorism.”

Instead, what is needed is greater transparency and accountability, as well as concrete legislative reform, anti-racist education and cultural changes. At a minimum, we need:

Read our full brief and see our sources here.

We’ve also co-published an additional brief for the National Action Summit with Azeezah Kanji from the Noor Cultural Centre: Islamophobia in Canada.